What does this blog title even mean?

Here's Room 506
It's enough to make you sick
Bridget's all wrapped up in foil
You wonder if she can uncoil.

Here's Pope dear Ondine
Rona's treated him so mean
She wants another scene
She wants to be a human being.

Pepper she's having fun
She thinks she's some man's son
Her perfect love's don't last
Her future died in someone's past.

Poor Mary, she's uptight
She can't turn out her light
She rolled Susan in a ball
And now she can't see her at all

Dropout, she's in a fix,
Amphetamine has made her sick
White powder in the air
She's got no bones and can't be scared

I LOVE MILK!
Posted by freetobedab at 10:36 AM No comments: 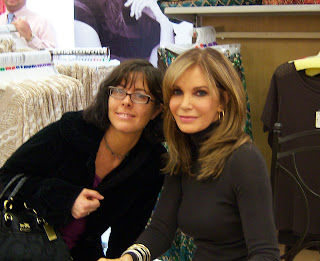 Posted by freetobedab at 6:07 AM 5 comments:

I Went to a Mets Game! Yippeeeee 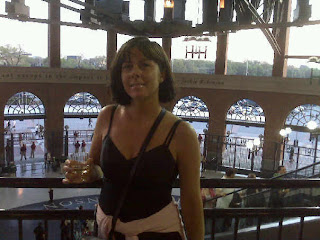 It's a grainy photo,I know (and I know my stance displays a gut-like protrusion from my mid-section but, as someone I once knew well enough to marry said, "I ain't got no gut"), but my Blackberry is shite, what can I say.

ANWAY. After my self-conscious weight comment, the game was super fun. The stadium is rockalicious and I got to drink wine at a ballgame, even. Top that. You can't. I know it.

My seats were a-maize-ing and I felt like a superstar in the balmy breeze. I am determined to make more games this year, and hopeful that the Yankees will lower their G-damn prices to make that happen. Doubtful. I know.
Posted by freetobedab at 6:42 PM 1 comment: 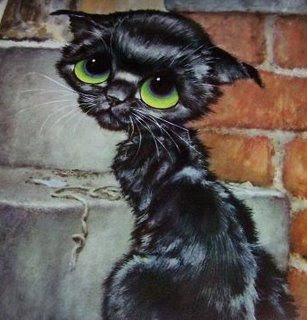 I am evil. I am starting to really become one of those people who scorns those who get in my way, grunts (like Clint Eastwood in his last film) even. I scan the streets, the subway platforms, the train stations, staircases, escalators, lines, you name it, for obstacles. And, if a small child being held by the hand and led up the staircase at 34th st. station, for example, is in front of me I curse them (in my head) as I impatiently wait.

Sometimes when there is a blockage of a person moving unreasonably slow, I don't even notice why they're slow, I just curse them as I go cruising by, only to learn that they are:

And then I feel bad.

But, most of the time (and I am NOT kidding) it's idiots doing the following:

1) talking on their cell phones
2) texting on their damn cell phones
3) using their damn Blackberry or iPhone to email or browse the internet
4) kanoodling with someone of the opposite (or same) gender
5) gawking at the oh-so-tall buildings and generally not paying attention to their surroundings.

And then I want to punch them in the neck.

A couple funny things happened yesterday. For one, when I was descending the massive staircases down into Penn Station these two crack-flaunting southern men sporting Toyota baseball caps (in blue and red, respectively) and carrying red Toyota bags (is there a car show going on or something) were walking next to me and they said, sounding frustrated already, "Can you imagine doing this every day," Twiddle Dee said to Twiddle Dumb, who replied, "Yeah, that would fucking suck" to which I turned to Twiddle Dee and laughed. Hicks. Your life is SOOOOOO hard.

On my walk down Lexington to the Subway I made a Malbec stop and as the guy was ringing me out, with the door to the shop closed even, both of us overhead this hooded sweatshirt girl yelling at someone on her cell phone, tossing around the love word with every other word. The guy bagged-up my purchase and he said something like, "Wow, I don't even know what to say..." I mean, the girl was LOUD. I replied, "Yeah, you'd think you'd get used to that, living in New York, but seriously..." Then, right as I walked out onto the street she started walking so we were in step. I couldn't help myself, I looked over at her and recognized her, it was the same girl from a month ago who was breaking up with her girlfried on the street (again, this all happened a couple blocks from Hunter). She was saying almost the exact same thing to someone on the phone. Exact. I remember all this because the last time I walked right behind the girl as she was screaming at her GF, for like five blocks when a rich older Joan Collins looking woman boldly told her to "Watch your language." I was thinking, "ew, shittttt" because, who knows wtf this crazy bitch is capable of doing, then the girl turned and faced the woman and said, "Fucking mind your own business you old bitch." To which, Joan Collins guffawed with an "I never" or some other useless comeback. Random as hell. Settle. Shesh.

Another day in mighty NYC. Just another day.
Posted by freetobedab at 1:22 PM 1 comment: